Make the Difference: EVF Celebrates Those Who Give Vision a Voice

Essilor Vision Foundation (EVF) is committed to giving children a better life through better sight. As EVF kicks off its 11th year, the organization is continuing to raise awareness and make the difference for those children whose lives are forever changed by a pair of glasses.

“We are grateful for the support of Essilor of America employees, labs and the community. Their unwavering support and commitment help us as we work to fulfill our mission of eliminating poor vision and its lifelong consequences,” says Kim Schuy, President of EVF.

The Heroes Award is given to individuals who directly went above and beyond.

The Spotlight Award recognizes leaders who have rallied support for Essilor Vision Foundation.

The Mary Lou Maguire Award for Spirit was presented to Stephen Shawler.

The Lab Excellence Award is presented to labs that go above and beyond to help support Essilor Vision Foundation and create a culture committed to the community.

The Partners in Excellence Award is given to organizations that elevate EVF in a big way. 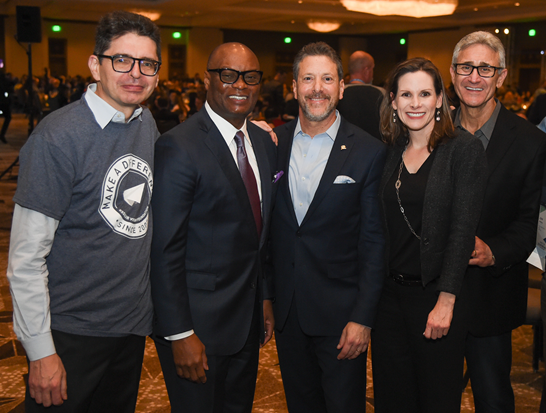 Event attendees also were treated to inspirational remarks from guest speaker and former Dallas Police Department Chief David Brown, who shared how he is making a difference in his community. Brown served as police chief from 2010 to 2016. He recounted his struggles in getting to be chief in a segregated society and how he’s using his experiences to give back.

EVF also launched its new website at the 2018 National Sales Meeting. The website implements an engaging atmosphere, which actively informs visitors about vision as a cause and EVF’s current efforts with schools, eye doctors, corporations, and charities.

With the incorporation of their new branding, EVF is telling their story and inspiring others to help the millions of children across America who cannot see clearly. To learn more, visit evfusa.org.